My love of makeup started late. I’m an elder millennial, so I didn’t really know what the hell I was doing until only recently. As in, 2016-ish? I can’t really say that I would have ever been comfortable walking into a Sephora until just last year or so. In this last year, though, I have amassed a nice selection of makeup essentials.

My husband would tell you that I went way overboard with my makeup purchases over the past year. I’ll tell you that he’s right. I spent too much. I bought more makeup than I needed and I really don’t experiment as much as I should for the amount of makeup that I own. So, allow me to spare you a little time by sharing some of my solid investments. Of course, some of these products won’t work for you, but if you’re somewhat like me:

…then perhaps some of my essentials might do something nice for your face.

I discovered Pixi during Target’s very brief stay in Canada in 2015. I tried a myriad of their products but found them very hard to come by after Target’s Canadian departure. For a while I was paying exorbitant shipping fees to get their sacred Brow Duo pencil (discussed below), but once Shoppers Drug Mart started carrying a small selection of their products I have been over the bloody moon. I was using the regular face primer for a while but decided to try out the “Flawless” version a year ago. It’s quoted to be essentially 20-year-old flesh in a bottle, which in a way is legit because the primer actually sparkles (like Twilight vampire sparkly) but fear not! Once you slather your concealer and foundation over it, all you get is glow.

I can’t say that I’ve tried a lot of highlighters, but I’ve always loved The Balm and I’ve seen enough YouTube makeup tutorials with this highlighter to basically cement my choice. A little goes a long way. (Like really, just a dab’ll do ya!) I’ve had mine for well over a year and there’s barely a dent in the pan.

Summers are pretty rough in Kamloops and I’ve found that any setting spray will usually keep my makeup where it needs to be, specifically in the under-eye region. The first few sprays I tried were cheap drugstore versions in 2 oz bottles. I burned through them pretty quick. The All-Nighter spray comes in a standard 4 oz bottle, which is twice as much for also twice the price, but what can I say? It’s worth it. The last bottle I got was a special 8 oz XL size that was limited edition. It’s now sold out, but I really do hope they bring it back because it was an amazing deal and my bottle is still going strong.

I’ve tried my fair share of translucent pressed powders and I can’t say that I’ve really noticed a variable difference between them. However, I will tell you that this stuff keeps my under-eye area pretty baked. Like whatever concealer I jam over my massive black hole writer circles pretty much stays there until I either cry or wash it off at the end of the day. Not to mention, the Ouija planchette design of the packaging makes it a solid investment, both in looks and in practicality. The lid swivels aside when in use and there is a nice magnet that keeps the powder closed for on the go.

So I literally just got this contour palette but I’ve been lusting over it for well over a year and after using it once I already know that I’m not going to be changing things up.

Form what I understand, this palette was designed for people with medium to dark skin tones, and the real “game changing” aspect of it was that it was a contour palette with cool shades, with which you can create real shadows. Prior to this palette, I was using the Kat von D Shade & Light contour palette for about a year. I liked it, but eventually grew frustrated that I couldn’t carve in my cheeks without it looking like I’d just fake n’ baked in the right parts of my face. It gave me far too much warmth. I needed some greys, dammit.

So I’ve used this palette about three times and I’m pretty much sold. They’re very pigmented. They build incredibly well. I love the darker greys, as well as that lovely banana yellow shade that I use to make my jawbone look super angled AF. All the pans are magnetized, so if you burn through one faster than the others, you can buy new ones individually. I also love that this palette includes blushes, so now I have one less palette to take with me on vacations. Like this thing is your entire face, honestly. AND, if you’re fair-skinned, definitely purchase the Volume 1 palette. I have heard many good things for Caspers hoping to put some colour.

This palette seems to have mixed reviews in terms of pigmentation. When I first bought it I watched a ton of YouTube reviews and regretted my purchase. Honestly, though? When I don’t know what to do with my eyelids, this is always the palette that I end up grabbing. It’s got all the stuff for neutral looks, from simple to smokey. There’s a good balance of matte and shimmer shadows. The colours show quite well on my warm skin tone, though I do really love the cool grey-brown matte shade most of all. I can do my standard Kate Middleton poser eye look with this. It’s the only palette I need when my husband’s hassling me to get ready quick. It’s the only palette I ever bring with me when I go on family vacations. I also really like that the case is plastic, so it does travel well.

So THIS was Pixi product that changed my life. For the longest time, I really struggled with eyebrow pencils. Like, how do you not use half the pencil in one application? I liked my brows pretty bold in the past, and this pencil can achieve that look without shrinking down to nothing. Now I do a more neutral thing. This is a twist-up pencil and a gel duo. I don’t use the gel with my looks these days, but I do like the option of having something to tame down the unruly brow hairs. My only complaint is that there could be a little more pencil and a little less gel, but considering that one pencil lasts me about four months, I can’t complain.

The Balm Put A Lid On It Eyelid Primer

Can’t say that I’ve tried other eyelid primers, but if I’m doing a more elaborate look, I always slap some of this on my eyes before blending in the shadows. The little tube lasts a long time, and I’ve definitely noticed that my coloured shadows don’t fade when I use it.

I never leave the house without lipstick. I also only ever wear bullet lipstick, (because I love making things difficult for myself), and at times it’s hard to keep that stuff confined to my lips. Some lipstick can stray more than others, but I typically don’t need to worry much with this lip primer. Some say it’s a bit tacky, but I put it on first, then line my lips up with liner, and then put the lipstick on. And yeah, this stuff will keep MOST of my lipstick in place for the day. I can’t say it keeps it lasting longer, but it does keep it contained like a good pile of sandbags.

So I’ve got a nice selection of lipstick. I’d recommend Necromany Cosmetica’s entire selection as a whole. They have neutrals and reds and pinks and some ultra-obscure shades, but out of my entire collection of Necromancy lipsticks, I do find myself gravitating to this rusty orange shade the most. It works as both a nude and as a bold statement shade. The formula has held up well over time. It’s long lasting AND stays in place.

What are some of your makeup essentials? Feel free to recommend me some decent concealers or foundations, particularly anything full coverage or that combats writer under-eye circles like a beast. 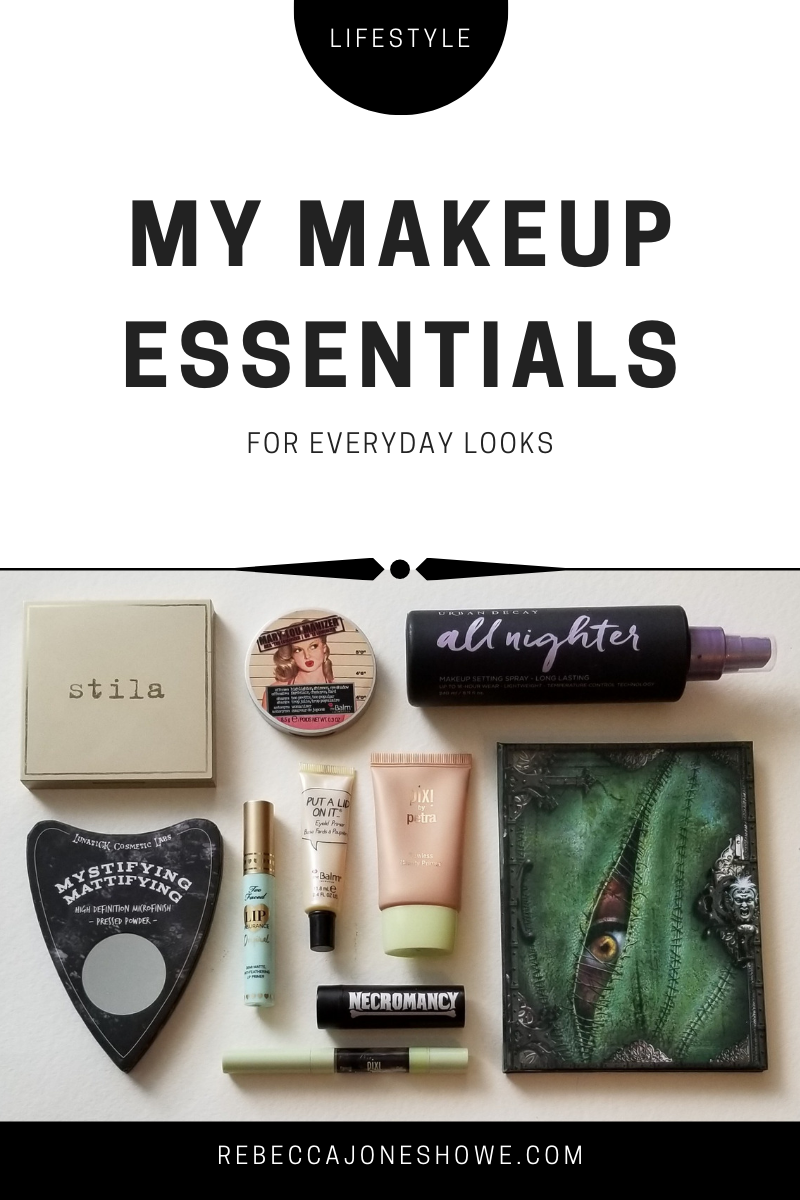 I Dressed in SQUID GAME-Inspired Outfits for An Entire Week

So Much Curling It’s Making Me Hard